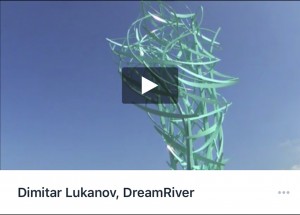 A visual diary of the making of 35ft tall sculpture DreamRiver, the signature piece of Dimitar Lukanov’s trilogy for MVGO (Amsterdam NY Pedestrian Bridge). The bridge along with his sculptural additions were recently recognized by the American Planning Association as one of six nationwide “Great Places in America” for 2019.

This architecture-in-motion – never the same from any direction – is a breathless drawing in space, a sailing dream, a bridge within a bridge, a waterfall – all in an instant of time, a gateway to a new hope.

Dimitar Lukanov’s 15ft filigree construction is an engineering feat of complex and innovative structural approach to urban environment serving as both the entryway into Riverlink Park/Pedestrian bridge as well as the focal point of South Amsterdam’s main thoroughfare, Bridge St.

The 800ft (250m) / 4000 lb. (2000 kg) of stainless steel tubing was bent and constructed by the artist without the use of computer as his winning proposal for Amsterdam NY pedestrian bridge.

The Making of Mother and Child at the Mohawk River – a public commission by the City of Amsterdam, NY. Installed January 8, 2018, the 12ft bronze sculpture is situated on South overlook of Amsterdam pedestrian bridge over the Mohawk River, NY.
Dimitar Lukanov started working on the piece September 5, 2017 and completed it December 3, 2017.

Dimitar Lukanov created the 19ft sculpture “Waterfall of Light” based on only two drawings. No computer was used.
He built the sculpture as a veritable drawing in space; work development was scaled by eye.
In the fall of 2016, Waterfall of Light is to be installed at its permanent home – South Carolina’s GSP International Airport in Greenville, SC. The sculpture will “live” as a visual crossroad; a welcoming beacon and a focal perspective point as if all trajectories of travel converge into one. The 19ft sculpture’s immediate vibrancy is embodied by an upward sequence of 250 light-filled, filigree steel elements and 300ft of bent steel tubing.

“Outside Time,” a new, monumental sculpture by artist Dimitar Lukanov is the 2014 signature piece of a three-work sculpture project commissioned to Dimitar Lukanov by JFKIAT in 2012 as part of the major redevelopment that Terminal 4 undertakes to accommodate 16 million passengers. The massive sculpture – a structural wonder of weight distribution – is an elated, optimistic “Goodbye” to the millions of departing New York air travelers.

“Outside Time” is a veritable drawing in space, a breathless, effortless, instantaneous gesture in the air. The piece aspires to halt, even momentarily, the relentlessness of time, to indeed be ‘Outside Time.” says Dimitar Lukanov.

“History of Time,” A filigree, ceramic wonder, the 10-foot sculpture History of Time is comprised by 70 fired-clay mini-sculptures that Dimitar Lukanov created individually by hand, over a period of eight months. The solemnity of the delicate clay pieces conveys the nature of the main sources of inspiration, the Samothrace Island in Greece as well as the timeless city of Jerusalem. The sculpture is a multilayered amalgam of openings, arches and walls. It is a stratigraphic wonder of balance where each and every one of the 70 unique fired-clay segments supports the next, above or below. Each segment is three-dimensional, so the sculpture can be observed from every angle. Adding to the magic of this piece is its minimal depth – a mere two feet for a structure as tall as eight feet and 10 feet wide.

June 2014, New York – The installation of the completed ensemble of three monumental sculptures – Voice of Tomorrow, History of Time and Outside Time – marks an important moment in the major redevelopment of Terminal 4 as it continues its expansion to accommodate estimated 16 million passengers per year.

With its brilliant color, Voice of Tomorrow is situated at the high traffic intersection at the end of the central retail hall and the start of the boarding gates walkway. Instantly popular with passengers, the 14-foot sculpture resembles a pulsating heart, the emotional embrace to all who are about to board. Placed at eye level, with no base, Voice of Tomorrow operates at the viewer’s level and becomes one with the viewer, according to Lukanov. Comprised of 150 feet of bent steel tubing and 150 elements, Voice of Tomorrow radiates its warmth beyond the physical boundaries of its construction. Like Outside Time, it is 90-percent airborne. “Voice of Tomorrow is a singular, starting source of energy, a veritable origin of warmth, and thus light,” added Lukanov.